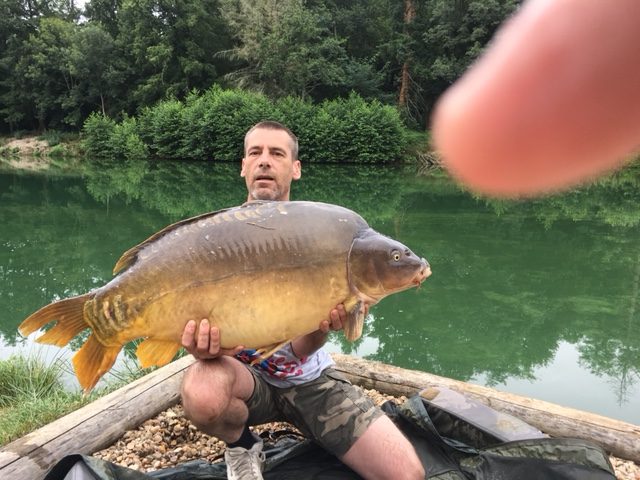 The Ruthven family of 13 returned to Puyravaud for the 6th time to enjoy 2 weeks of R&R from their busy lives in the UK. The group always combine some fishing with lots of other activities such as Go Karting, Laser Quest, sight-seeing and visiting a few good shopping haunts.

They focused the first weeks fishing efforts on Kingfisher Lake and were soon landing some nice fish. Paul and Mark both got into the fish and landed some good high 40’s, before Paul broke his PB on day 4 with a lovely 52lb mirror. Mark’s best for week 1 was a nice 44lb mirror. However, Paul left his best until last and landed a new lake and venue record when he tempted a beautiful 59lb mirror to the bank using an 18mm garlic and liver boilies topped with white fake corn.

The fish was weighed on two separate scales to ensure accuracy and confirmed as the new Kingfisher Lake record. Not to rest on his laurels, Paul then caught another beauty of just under 50lbs soon afterwards to round off a fantastic week for the group. In total they managed 14 fish with a total weight of 622lbs and an average weight of 44.8lbs.

The group have already booked their 2018 trip to ensure another opportunity to catch some great Puyravaud carp.