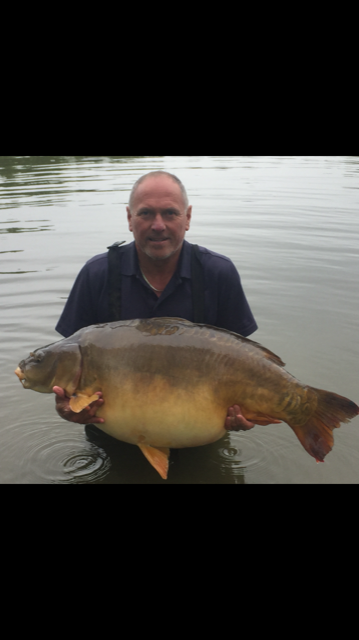 Graham, Ian, Mike and Jason were enjoying their first weeks fishing at Puyravaud with quite a few nice fish arriving on the bank. Jason was quickly away with a new PB of 49lbs 14ozs and then broke that again with his second fish of 56lbs 14ozs! His week has continued and he has over 20 fish to his name. Ian also had a nice 50 that just missed his PB by a few ounces.

Graham quickly joined the Puyravaud 50’s club with a fish of 52lb, still short of his 56lb PB. Some good 40’s and 50’s were hooked and landed until Graham finally landed that PB fish, a mirror of 58lbs 12ozs that also broke the Heron Lake record in the process. As always, the holder of a Puyravaud lake record receives a bottle of Champagne and here is the evidence to prove it!

There is still time for Mike and Ian to get their PB’s as the fish feed up before spawning.