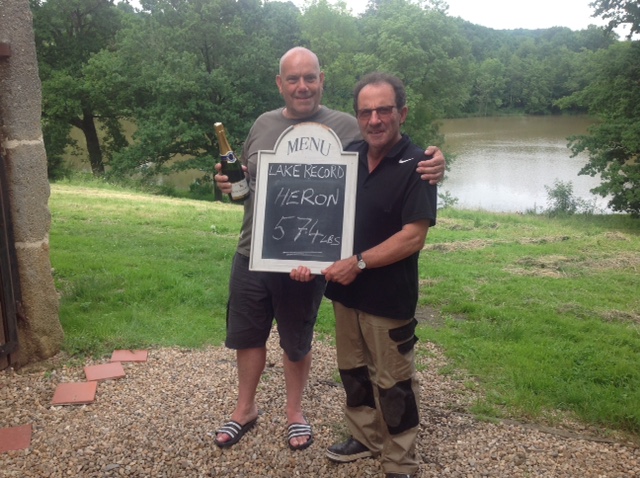 The beginning of June saw a continuation of the stormy weather we had seen in May. Thunder storms hit regularly, along with heavy rainfall and winds. Not what our customers wanted. But there is always an upside – the fishing has been really good with some excellent catches and a good head of 50’s coming out on a regular basis.

Alan Harwin is on his first trip to Puyravaud with friend Graham and their wives. A two week stay has allowed them to fish both lakes and Alan had two PB’s on Kingfisher with his biggest fish a 58.4lb mirror. Moving on to Heron, Alan immediately found the fish at the shallow end of the lake and after landing fish weighing 49.7 and 35lb, he was into something bigger, landing a 57.4lb common at 2.30am to break our Heron Lake record and land his 3rd good 50 of the trip!

Graham, after a difficult start, has also found the fish at the other end of the lake, landing numerous PB’s including a very nice 37lb fish. More to come in the rest of the week as the weather settles down.