Carl, Bella and daughter Madison arrived at Puyravaud in heavy rain with little idea of the session Carl was about to have.

Despite the weather, Carl had a brilliant start with a 61lb 13oz common, followed by a lake record grassy of 46lbs 9ozs. Two more good 40’s followed on day 1 with day 2 starting with a fantastic 62lbs 6oz lake record and PB common. A dream start that continued with fish all through week one of the trip.

Week 2 could not be anywhere near as good could it. Certainly it could! After bagging 32 fish, Carl managed another 33 in week 2 for a total weight of 2828lbs!!!!!!!! The largest weight ever caught at Puyravaud by a single angler. Average weight across the two weeks – a staggering 43.5lbs! Carl ended up with 5 x 60’s, 9 x 50’s and 27 x 40’s during his stay. Only 4 of his fish were under 30lb. Carl even caught our lake record common twice during his stay!!!! Top angling!

Simply a never to be repeated session that happened after over 20 years of fishing in France. 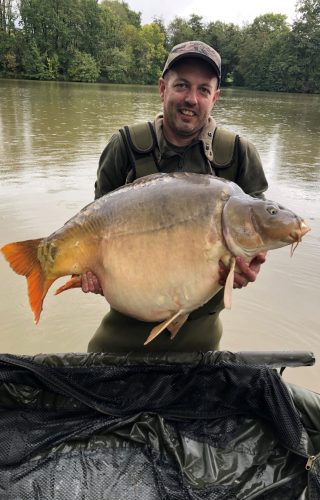